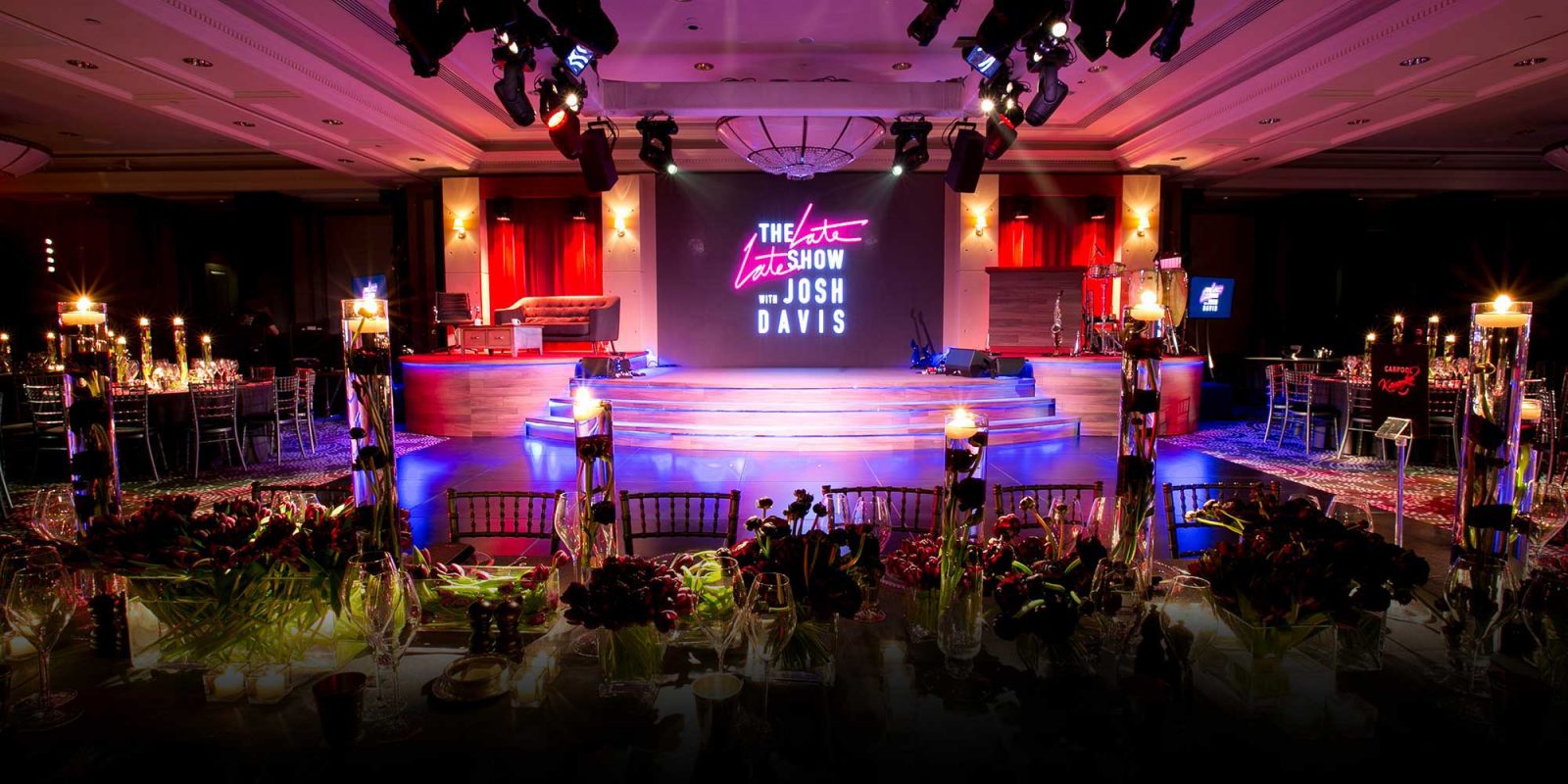 This was the second Bar Mitzvah within this family and after attending so many other celebrations of this nature, it was decided that the client wanted to do something completely different from anything that they had previously seen.

Using their North American connections as a reference and discovering their favourite television shows, it was decided that the famous Late Late Show with James Corden would be recreated especially for the occasion. One of the key points made by the client was that they wanted to break the traditional mould of speech delivery and find an alternative way to convey the message. With that in mind, our panel-show bar mitzvah was born.

From the moment the guests arrived at the venue, there were indications of the immersive experience that they would later discover in the Ballroom – these subtle touches included the staff and crew wearing personalised t-shirts with “Producer”, “Crew” and various other job titles on the backs. Once the scene had been set in the reception, it was time to bring the guests through and reveal the impressively real television set that had been constructed on a central stage. On the stage, a sofa set up with branded mugs, and all necessary requirements for a TV set had been put in place and we were ready to roll.

A true television show would not have been complete without a professional presenter, sourced from Sky TV, and a professional floor manager. These people played a key role in transforming the evening from an event to a television show. Since the family made their views on speeches clear but didn’t want to miss out on involvement from family and friends, we devised a plan to have the bar mitzvah boy’s friends and sister interviewed by the presenter and deliver their messages in that alternative fashion. This method was wonderfully engaging and left the guests thoroughly entertained.

As a backdrop to the stage, a large LED screen had been rigged so that an additional compilation of heartfelt messages could be played and viewed by the crowd through a video in the form of Carpool Karaoke. The laughter filled the room and everyone enjoyed this piece of entertainment and again, it was an excellent alternative to a string of speeches.

In and around the excitement of this TV show, exquisite food had been served and talented DJLIVE performers had been entertaining the guests, seated at their aptly named tables of features from the Late Late Show. As with any TV show the applause repeatedly filled the room and led to an evening of dancing, fun celebrations and unforgettable memories.