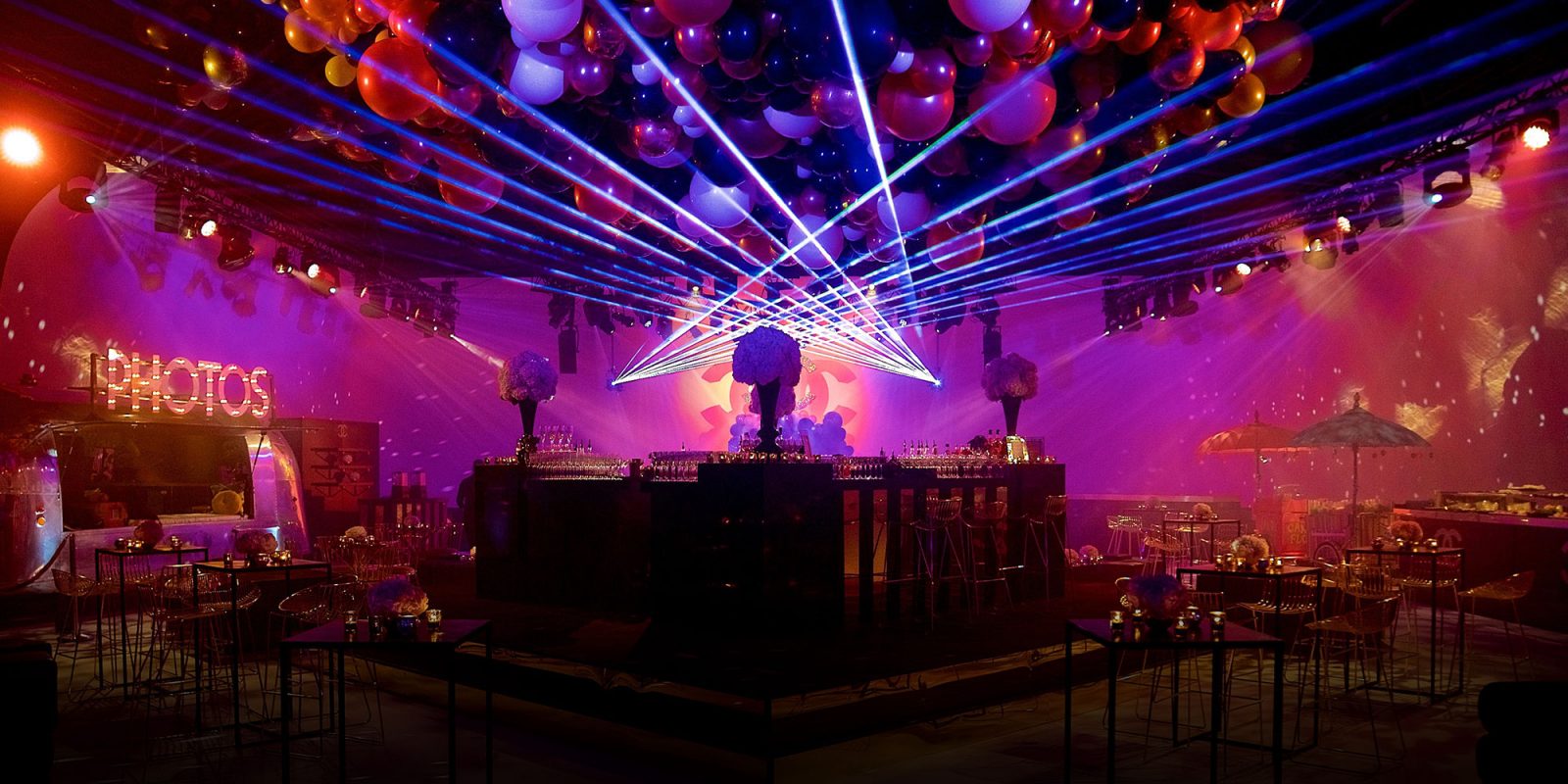 Many would ask how a Bat Mitzvah and an adult birthday party could ever successfully combine. Fortunately the JustSeventy team love a challenge and they relished the task of finding the perfect balance.

The brief described was that of a cool nightclub, aesthetically geared to adults but with a wide variety of entertainment in order to keep the Bat Mitzvah girl and her friends busy.  When the young ones are kept occupied, the adults are able to switch off and truly enjoy themselves.

Event planning in a film studio is always an exciting concept as it allows for increased levels of creativity and a greater scope for freedom of design, and that is exactly what happened.  An impressive focal point within the room was the raised central bar with an incredible balloon installation suspended above it.  Thousands of balloons made up the enormous studio cloud, resulting in the ceiling no longer feeling so high, creating a more intimate atmosphere.  It naturally attracted everybody’s attention… such a clever design managing to be both fun andsophisticated.

The family had allowed the JustSeventy team to embrace the concept of a stylish Ibiza nightclub therefore a number of lasers were added, as well as some podiums and a catwalk bench which some dazzling dancers later took to and wow’ed the crowds.  CO2 guns to blast the guests while dancing not only cooled them down but transported the young, the old and the in-between to the most sought-after and trendiest night spot in the capital.

Parties, particularly Bat Mitzvah parties, can often follow a heavily pronounced theme however gimmicks were something that this particular family wanted to avoid.  There was a very subtle nod to the Bat Mitzvah girl’s initials by using a suspended double ‘C’ monogram to embellish the DJ Booth.  With such a fantastic design, a well-known DJ was only too happy to jump behind the decks and get the party going, filling the bespoke Perspex, black and gold diamond-shaped dancefloor.

Throughout the evening, guests were invited to enjoy a wide range of culinary delights: a Land Rover pizza oven, instant ice cream, sushi rolls, salads, milk shakes… and the list goes on!  Such delicious food needed equally delectable beverages, so a range of bespoke cocktails were created and served in abundance.  All food and beverage teams on the night wore branded t-shirts in the style of nightclub staff, which was also in keeping with the casual chic dress code.  With the food areas dotted around the room, guests were able to move around, socialise and enjoy the entertainment between plates.  A plethora of entertainment filled all corners of the room, for both adults and children.  Adults were taken back to their youth with a huge Scalextric, and the children enjoyed an über-cool airstream photo booth… endless fun for everyone!

Such a whirlwind of design, entertainment and excitement created the perfectly sophisticated yet youthful party that this family desired.   What a night to remember by our Bat Mizvah girl and birthday boy for years to come… event planning really is all about making memories.