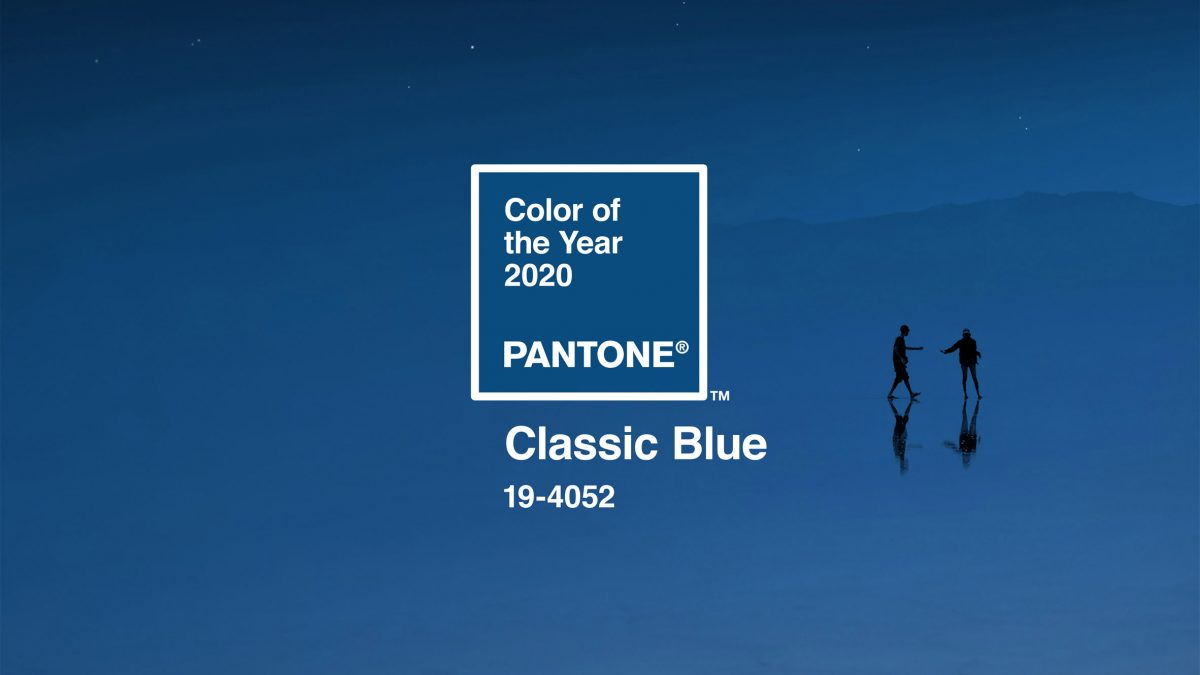 Below is our January 2020 JUST TRENDING newsletter.

JUST FACT – Pantone has named a colour of the year for more than two decades. In 1963, the company created the Pantone Matching System, a proprietary system used in a variety of industries such as printing, graphic design and fashion design to manage colors. Each year’s colour is decided through a long and thoughtful process that takes into consideration lifestyle and industry trends. The 2020 Pantone colour of the year, 19-4052 Classic Blue has been described as a timeless and enduring hue, elegant in its simplicity. Suggestive of the sky at dusk, the reassuring qualities of the thought-provoking colour highlights our desire for a dependable and stable foundation from which to build as we cross the threshold into a new era.

In addition to releasing the iconic Pantone colour swatch for PANTONE 19-4052 Classic Blue, Pantone has collaborated with a number of sensory experts from the worlds of music, food, fashion, beauty and technology to envision PANTONE 19-4052 Classic Blue as a sound, a smell, a taste, and a feeling. Taken together, all of these sensory inputs have been designed to inspire creatives and consumers to think about colour differently, to uncover new patterns and associations, and to encourage them to create new experiences that speak to people’s hearts as well as their minds.

JUST ENTERTAIN – If it ain’t broke, don’t fix it – and although The Globots are not necessarily new to the events scene, we should not forget the power of impact and visual stimulation at an event. This LED, CO2 Globot went off at a recent party hosted at the Emirates Stadium this month. Coupled with a talented DJ and musicians, clever lighting and timed impact, the guest response was to the Globot was amazing. We are constantly challenged to deliver only the “new” and exciting at events, but with clever planning and delivery, sometimes a re-visit to a tried and tested product can be the added something that tops off an amazing party.

JUST EXPERIENCE – London’s infamous immersive cinema fiends Secret Cinema will bring the peerless romcom Dirty Dancing to life once again next summer, following the huge success of their first Dirty Dancing production in 2016. The spectacular production is back for a two-week run, beginning on July 22nd, 2020 and inviting everyone back to Kellerman’s for the summer. If you would like to create a secret cinema style event for summer or Christmas for your staff or suppliers get in touch with us to create an immersive experience for you.

JUST ENTERTAIN – This month we were lucky enough to have the world and European female football freestyle Auguska Mnich perform alongside football freestyler Jamie Knight at the Emirates Stadium. The pair performed a custom 10 minute choreographed show to the guests followed by some guests interaction on stage. Even Arsenal Fan TV got involved with the action as well. If you would like a custom football show or workshop at your next event, drop us a line here.

JUST TRENDING – DCappella is Disney Music Group’s new a cappella singing sensation featuring 7 world class vocalists singing hit after hit from the amazing Disney and Pixar songbooks. Iconic songs from The Lion King, The Jungle Book, Frozen, Mary Poppins, The Incredibles, Aladdin, Toy Story and many more. With a rock show style production and showing specially created video content from and inspired by some of the most successful films of all time, DCappella deliver an amazing show for audiences of all ages. You will marvel at the fact that everything you hear is generated by the human voice as you experience the magic of Disney in a whole new way.

JUST EAT – This month we were lucky enough to try the delights of Pleesecakes sweet cheesecakes. The inspiration behind Pleesecakes is thinking outside the box, experimenting with flavours and designs to create visually-exciting and great tasting products. Joe (owner and founder) wanted to bring the generic cheesecake into the 21st century with his designs.

In May 2018, the producer of Dragons’ Den invited Pleesecakes to appear on the show. Despite being offered a significant investment from Touker Suleyman, Joe turned the Dragon down. “He wanted a massive chunk of the company but I knew the potential of the business, I knew the products, I had the vision. I didn’t think I needed to give it away.” And since, business has only gotten busier. Pleesecakes supplies Selfridges’ bakery, Deliveroo and Ocado. The team has developed a range of vegan recipes too, including chocolate and chilli, and chocolate orange, to name a few.

The company also offers a Build Your Own Cheesecake Bar for events which is something that we cannot wait to offer to our clients. Check out their Instagram here.