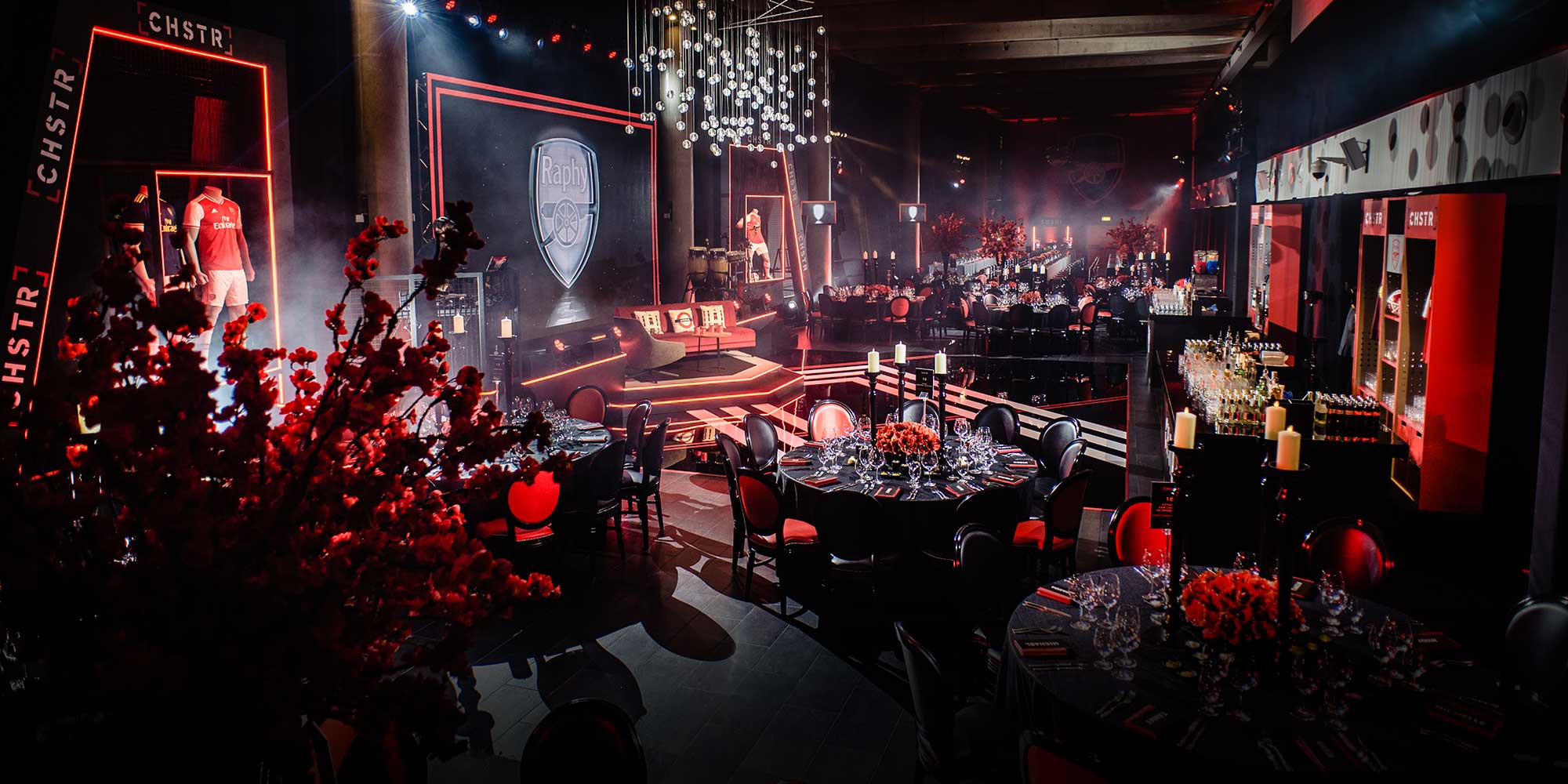 Finding a venue is the starting block for all event planning; without a location, there is no party. When considering the perfect place for an Arsenal enthusiast, the family looked no further than the very home of the team, and their passion: the Emirates Stadium. Set in Highbury and the fourth-largest stadium in the UK, this was going to be a Bar Mitzvah location like no other.

Often a Bar Mitzvah, or any party for that matter, is themed in a way where the décor is the vehicle in which to transport the guests to a chosen idea. Hosting the event at the Emirates meant that the challenge would not be contrived theming but instead how to take the guests on a personal journey rather than simply a visitor’s tour of the famous stadium.

With Jeff Stelling, sports journalist, presenting the evening, the overall format of the evening derived from that of Sky Sports News. Taking the approach of a TV show set, the guests felt immersed in a moment of Gillette Soccer Saturday and Arsenal TV, with the host even interviewing the family friends to dish the dirt on the Bar Mitzvah boy.

Months of dedicated design work from the JustSeventy team saw a clever combination of premium merchandise mixed with subtle nods to football in order to keep the overall vision appealing and relevant to both the younger and older audiences. The custom bar had been built in the style of a changing room locker, housing a display of the client’s personal collection of signed football shirts. There was a media wall, customised to the family name, which saw Arsenal TV’s Robbie Lyle mix with the guests and put them on the spot in a post-match interview.

A close second in rank to the importance of Arsenal, food and drink were paramount to the client’s successful execution of this occasion. The client had flown in eight hand-picked world-class sommeliers to both introduce and serve the wine which had been carefully paired with each course. The carefully created menu was exquisite and reached its peak with a dessert feast revealed later in the evening.  A display of gluttony and sugary decadence, the guests devoured the clients’ most loved desserts from their favourite restaurants.

The evening’s entertainment was a collaboration of champions, leaving the guests in raptures by all that they had seen. An epic meeting of two world-class violinist, performing together for the first time, projected an unstoppable energy around the room, forcing all guests to their feet. Running parallel to this musical explosion, two World Championship football freestylers grasped all guests’ attention with their bespoke performance, created especially for this night, designed as a competition between the two of them.

A phenomenal DJ with live musicians in accompaniment ensured everyone would be on the dance floor until the end, then add in surprise LED CO2 robots and the party feeling was unstoppable. A pure explosion from beginning to end, this stadium extravaganza would remain one to be talked about for a long time to come, far beyond Highgate.

To have the team at JustSeventy create a magical experience for you, contact us on the form below, at events@justseventy.com or call us on 020 7060 7170